John & Pat would like to thank customers old and new for their support at the Blackbrook Production sale.
The Blackbrook Longhorn production Sale for John and Pat Stanley proved a resounding success with possibly some of the best genetics in the breed being offered for sale and selling to a packed ring of supporters with a spirited and hotly contested demand.

Top call of the day at 5,700gns went to Southfield Lyric – a 5 year old cow by Blackbrook Philosopher who was a Breed Champion winner at the Royal Show – she had been used in an embryo transplant programme with all her embryos having been exported to Australia. Southfield Lyric was sold with a bull calf at foot and returned home to her breeders David and Angela Blockley in Bradford, Yorkshire.

Other cows with calves sold briskly at 2,400gns for Blackbrook Wren, a Blackbrook Trapper daughter. The 4 year old had a steer calf at foot and was secured by S Mullan from Hexham, Northumberland.

Keen supporter of the breed, David Howden from Buckingham who runs the “Pointer” chain of restaurants which specialise in Longhorn beef made two purchases at the sale. Howden secured Blackbrook Vodka with a heifer calf at foot for 2,350gns as well as in-calf-cow, Blackbrook Topaz by a former Reserve Junior Champion at the Royal Show Blackbrook Odin carrying a calf by Blackbrook X-Chequer at 2,500gns.

Strong support from Bertrand Facon who has established a prize winning herd at Banbury, Oxon valued the quality animals on offer, taking a total of five from the sale. The top of his purchases being Blackbrook Ysolde, A Blackbrook Uruk-Hai daughter and recently served to Huntsham Cardinal. Cows and calves were also on the shopping list with Blackbrook Vole and steer calf taken at 2,200gns.

Senior Heifers were all closely followed – none more so than by David and Angela Blockley for their noted Southfield herd in Yorkshire – the long-time breeders securing two at 2,700gns and 2,550gns for Blackbrook Ysabel and Blackbrook Yoo Hoo both by Blackbrook Uruk-Hai and the later carrying a service to Eyebrook Richard one of the pair that won the coveted Burke Trophy.

Junior Heifers were not to be left out and also enjoyed a sound following peaking at 1720gns for Blackbrook Zuleika to D Sargeant, St Osyth, Essex.

Bulls topped at a very creditable 3,000gns for Blackbrook Zulu another progeny of Blackbrook Uruk-Hai and tracing to Southfield Lilac II on the maternal line who won first Royal Show and Female Champion, Great Yorkshire, he was purchased by AJ Parker & Sons, Derby. 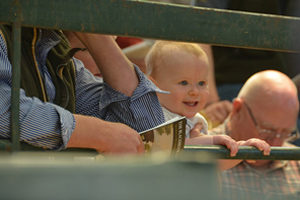 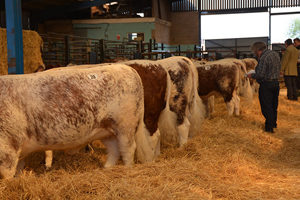 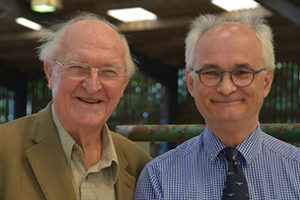 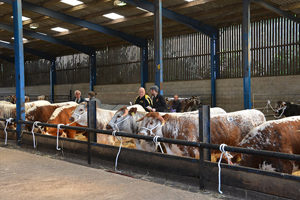